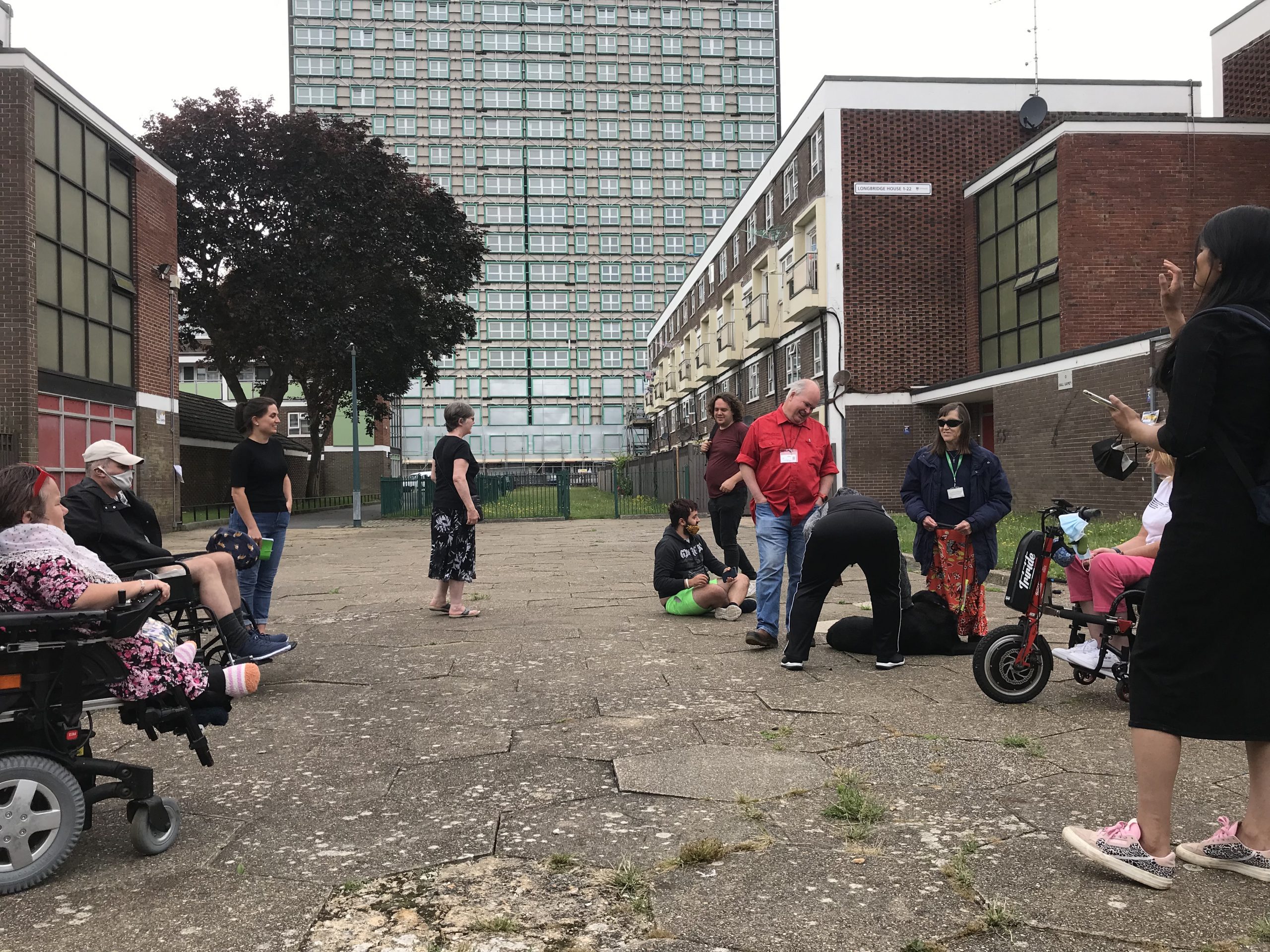 PORTSMOUTH PEOPLE living with disabilities took the Horatia and Leamington Houses design team for a tour of Somerstown to show them how the redevelopment of the site could help the area work better for them.

Portsmouth City Council is bringing down the 1960s blocks in Earlsdon Street and Meriden Road, and replacing them with a high quality, sustainable, mixed-use urban neighbourhood that is attractive to residents and works well with the surrounding area.

Portsmouth resident Gina Perryman, who is herself a wheelchair user, helped Portsmouth City Council to organise a tour of the area because she wanted people with visual impairment, people with hearing loss and people with other disabilities to have the chance to show the design team, from Karakusevic Carson Architects, how the masterplanning of the new development could make it easier for them to get around and use the space.

Gina said: “It’s great the project was able to involve disabled people so early in the design process – their advice is invaluable because they can give practical solutions that designers may not have considered.

“Disability is so far reaching and it’s not always possible to do everything but engaging with disabled people early in the scheme hopefully will go some way to ensure equal access for everyone.”

Watch a two minute video below of a pop-up, public open drop-in session the council hosted in an underground car park in the centre of the site.

Portsmouth demolition specialist firm Hughes and Salvidge has started carefully bringing down the buildings from the top down and the council has committed to replacing them with a minimum of the 272 council-owned homes that will be lost. The council has also said that it will improve green open space, play areas and community facilities.

Cllr Darren Sanders, cabinet member for Housing and Homelessness, said: “We’re listening to the community because we want to know how this can work best for as many different people as possible.

“We want to make this site, and the surrounding area, better for the people who live there and we know that means having a meaningful dialogue with local people from the very beginning of the process.”

Kieren Majhail, who is heading up the design team for social housing masterplanners Karakusevic Carson Architects, said: “The feedback and insight from the group was amazing, we got the opportunity to listen to the individual views from a diverse group of local people living with different disabilities. They shared their ideas on what they would like to see in the new development to help make it more accessible for all people. We would love to continue the engagement with the group as the ideas become more developed.”

The council launched a Horatia and Leamington Houses community panel in March 2021 following a major public engagement in summer 2019 in which thousands of local people were asked what they wanted to happen to the site.

The community panel has been meeting once a month and is at the centre of the deconstruction and redevelopment project. The panel includes local people, residents groups, schools, businesses and charities.

If you would like to join the community panel, call development delivery manager Mary Devaney on 023 9284 1791 or email mary.devaney@portsmouth.gov.uk

Watch videos to find out more about the project at horatialeamington.portsmouth.gov.uk

We use cookies on our website to give you the most relevant experience by remembering your preferences and repeat visits. By clicking “Accept All”, you consent to the use of ALL the cookies. However, you may visit "Cookie Settings" to provide a controlled consent.
Cookie SettingsAccept All
Manage consent

This website uses cookies to improve your experience while you navigate through the website. Out of these, the cookies that are categorized as necessary are stored on your browser as they are essential for the working of basic functionalities of the website. We also use third-party cookies that help us analyze and understand how you use this website. These cookies will be stored in your browser only with your consent. You also have the option to opt-out of these cookies. But opting out of some of these cookies may affect your browsing experience.
Necessary Always Enabled
Necessary cookies are absolutely essential for the website to function properly. These cookies ensure basic functionalities and security features of the website, anonymously.
Analytics
Analytical cookies are used to understand how visitors interact with the website. These cookies help provide information on metrics the number of visitors, bounce rate, traffic source, etc.
SAVE & ACCEPT
Powered by