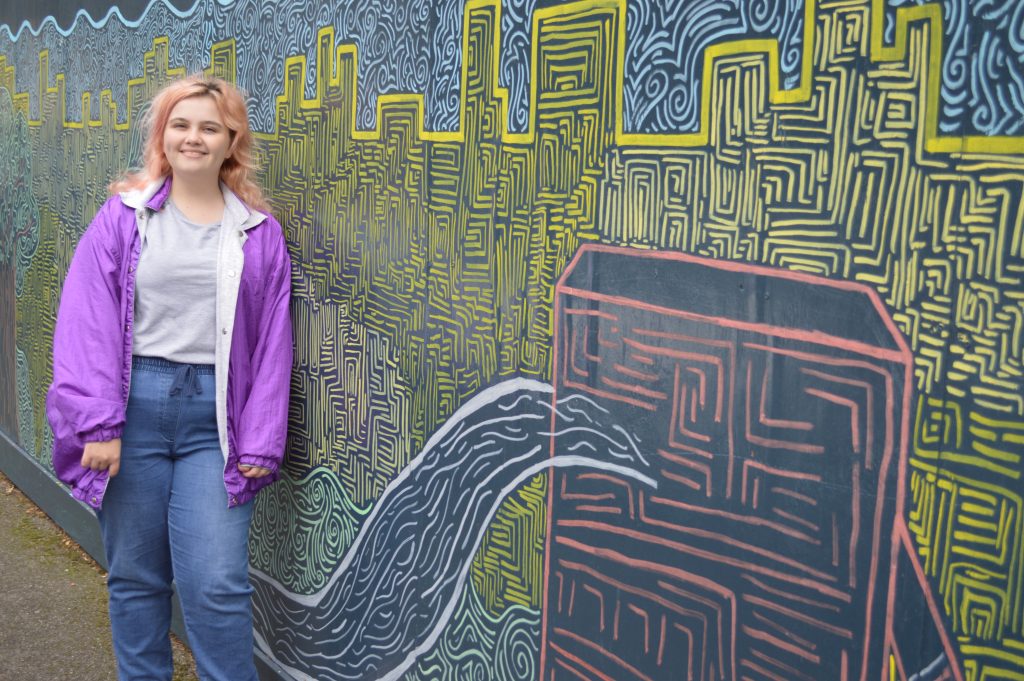 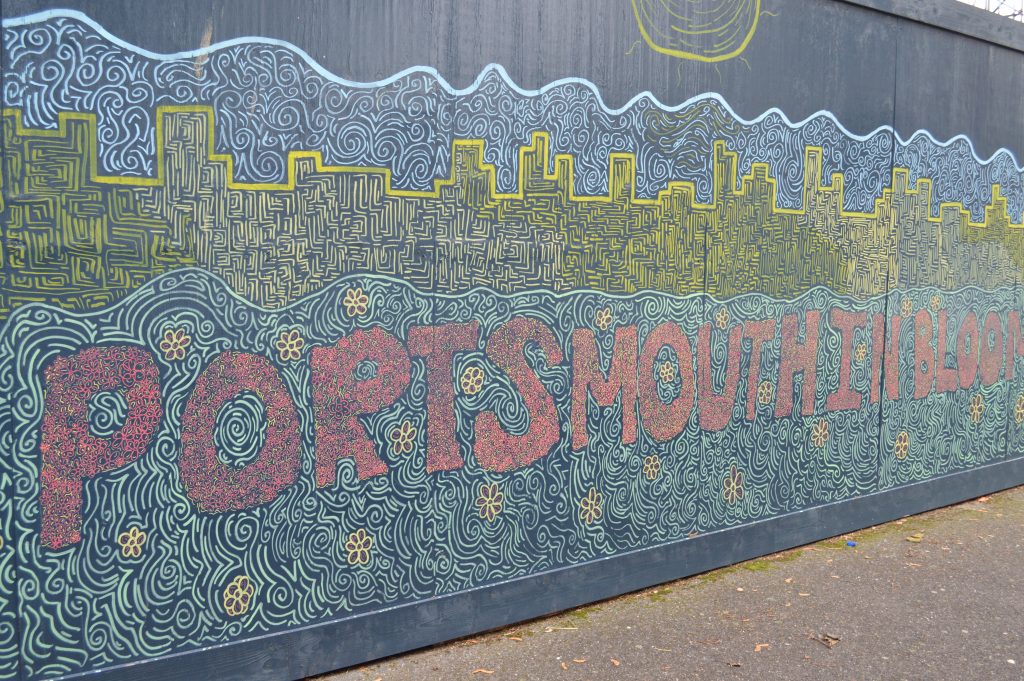 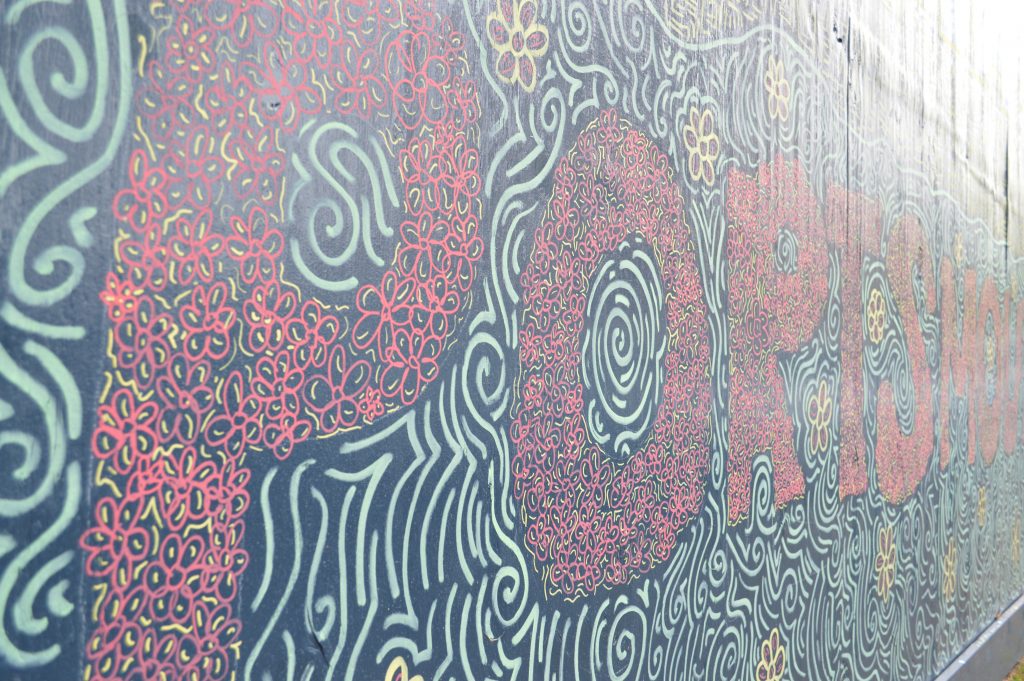 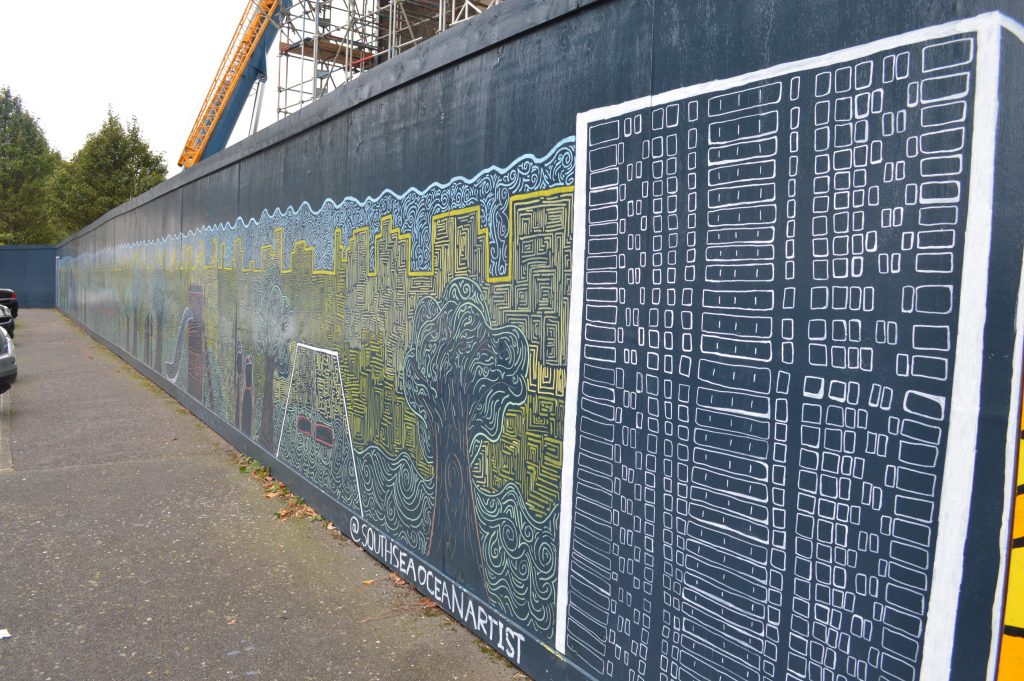 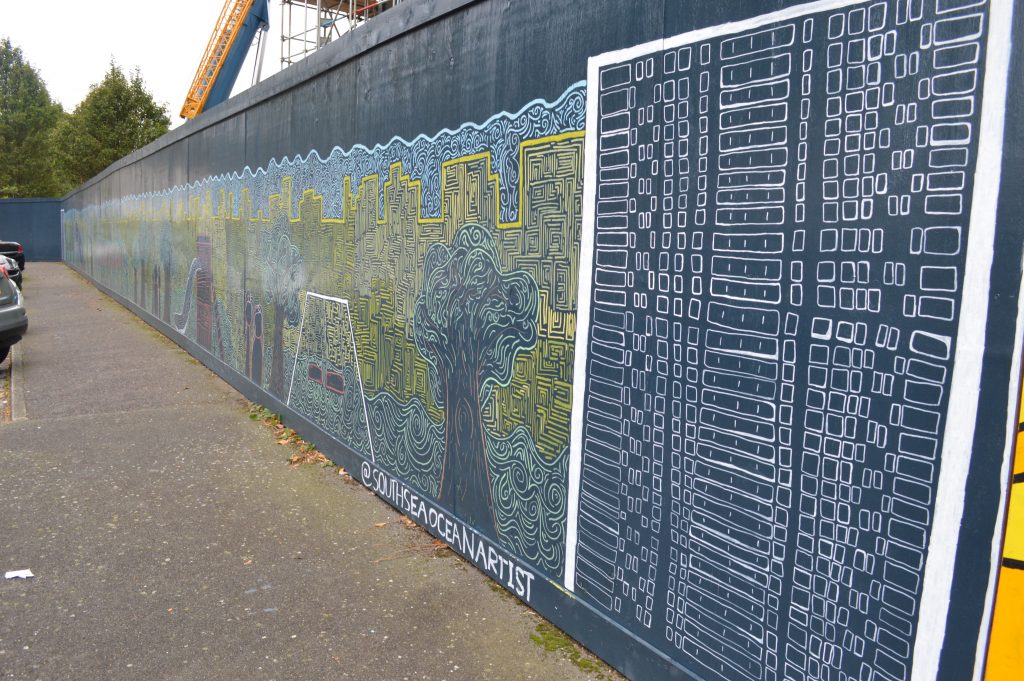 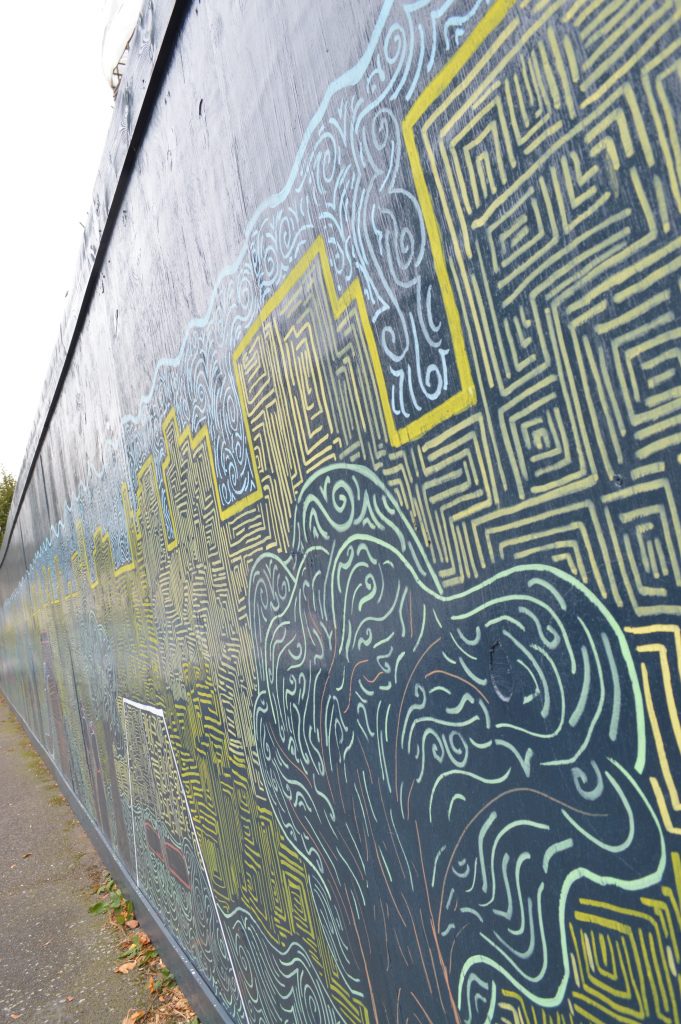 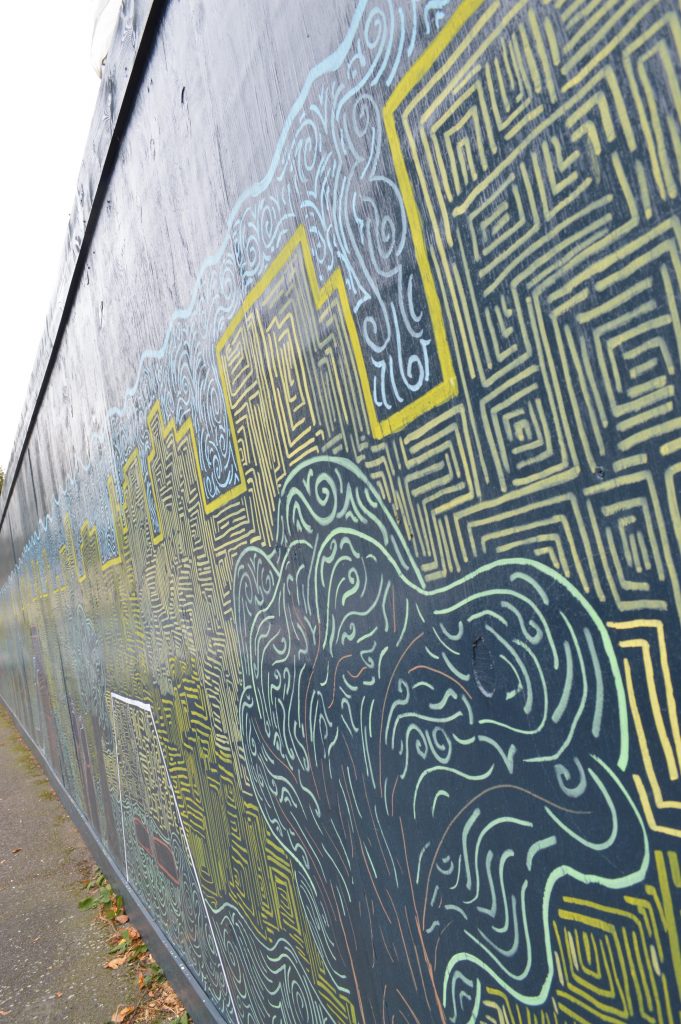 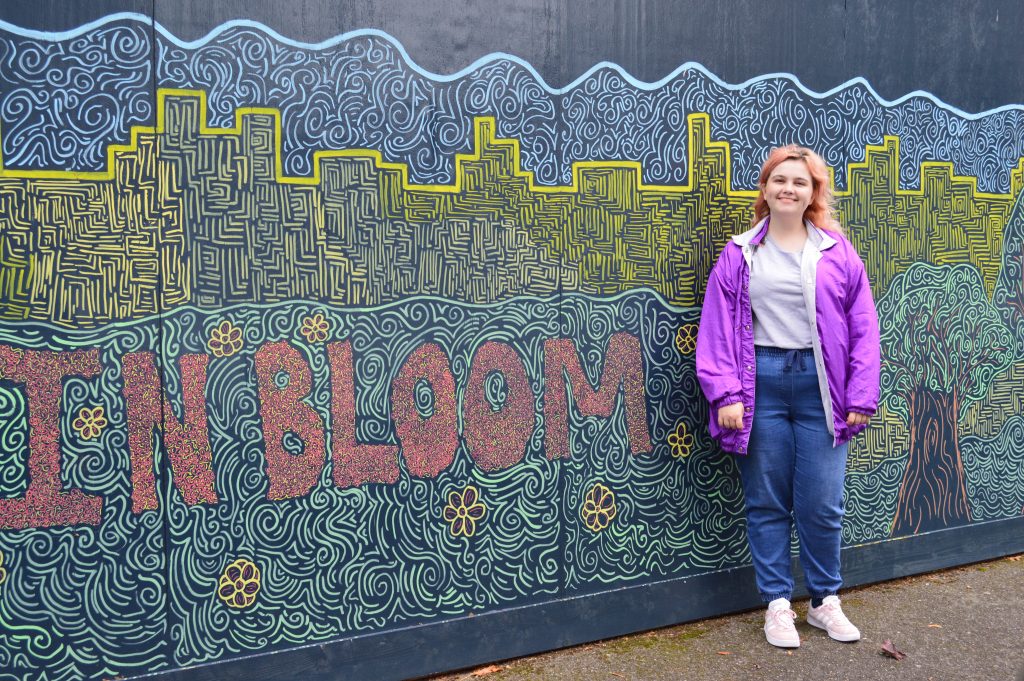 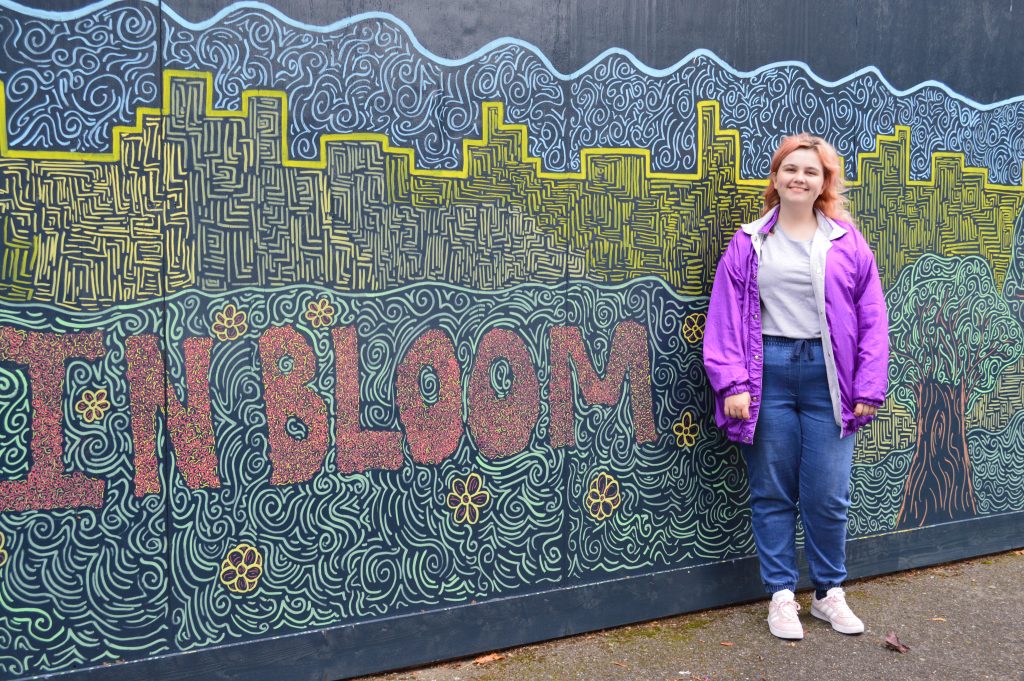 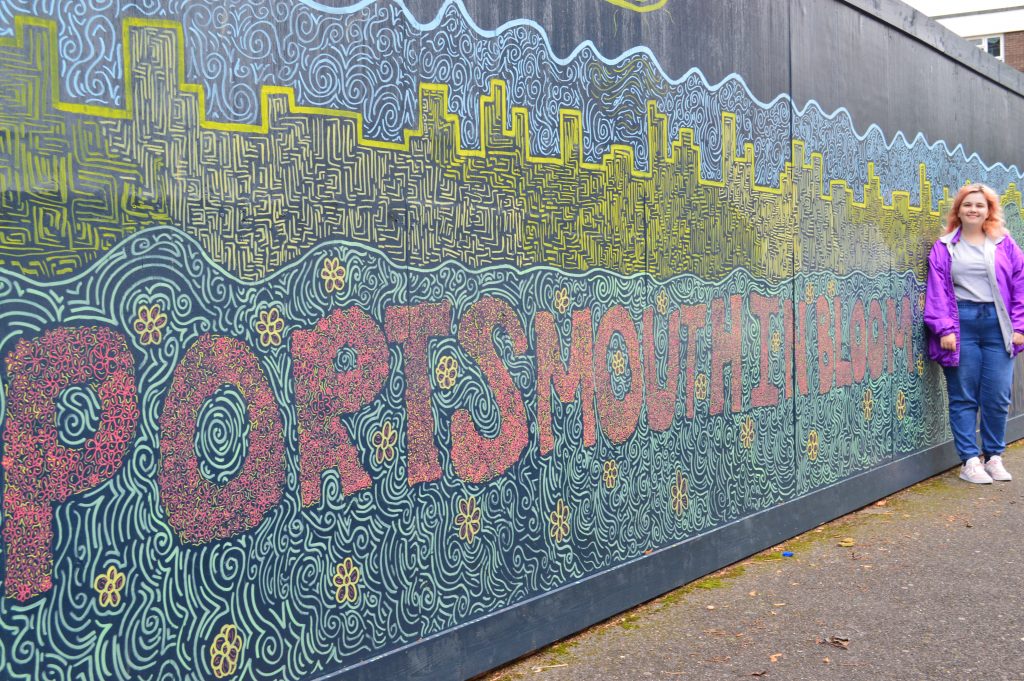 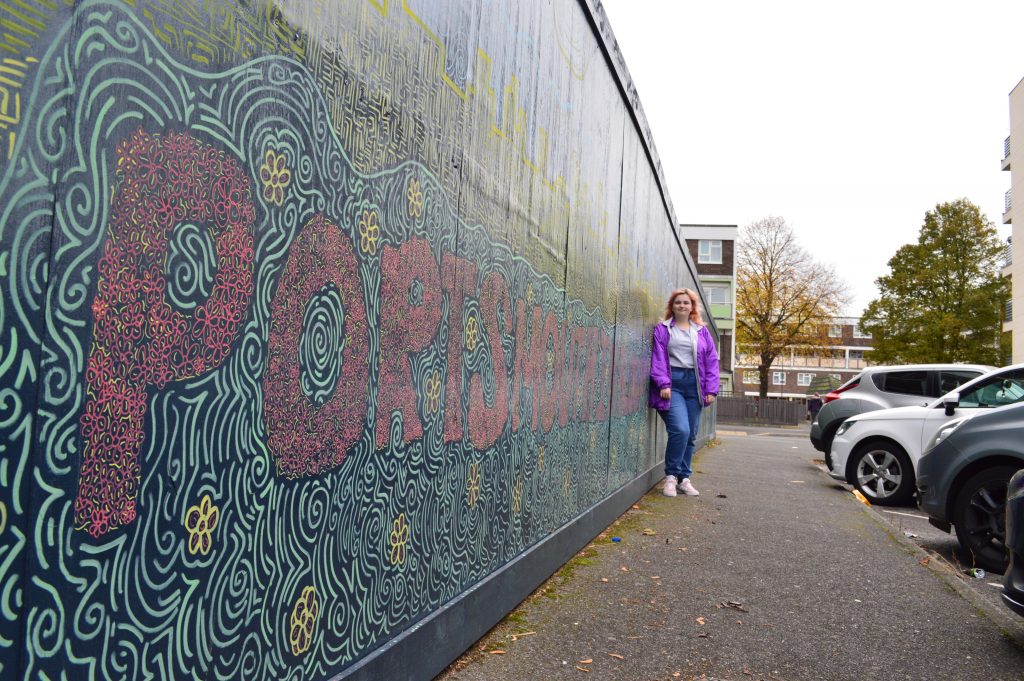 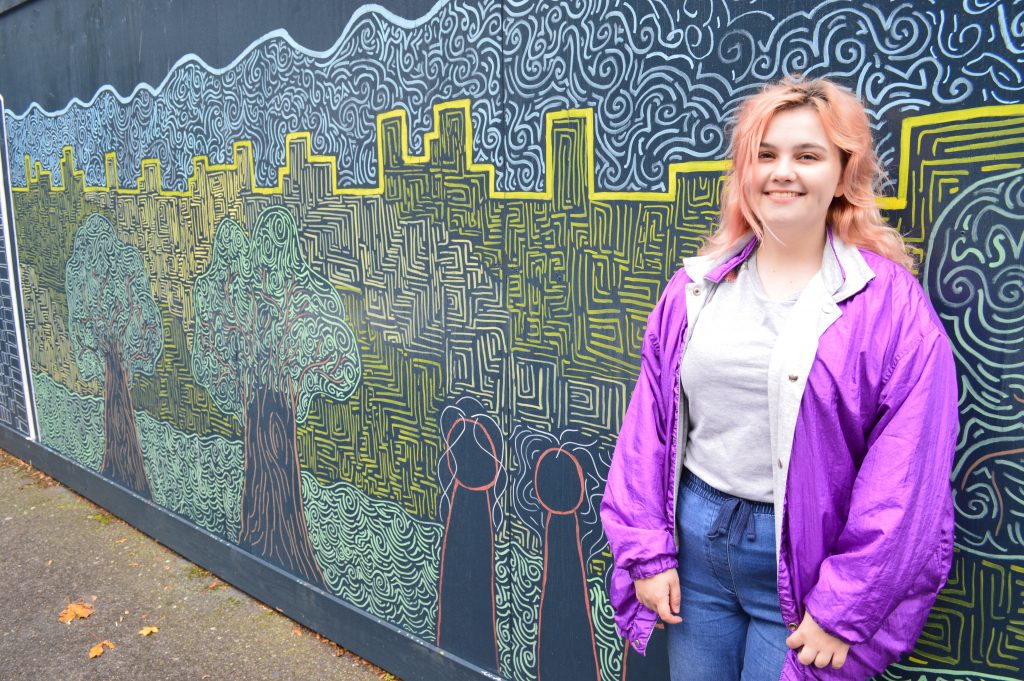 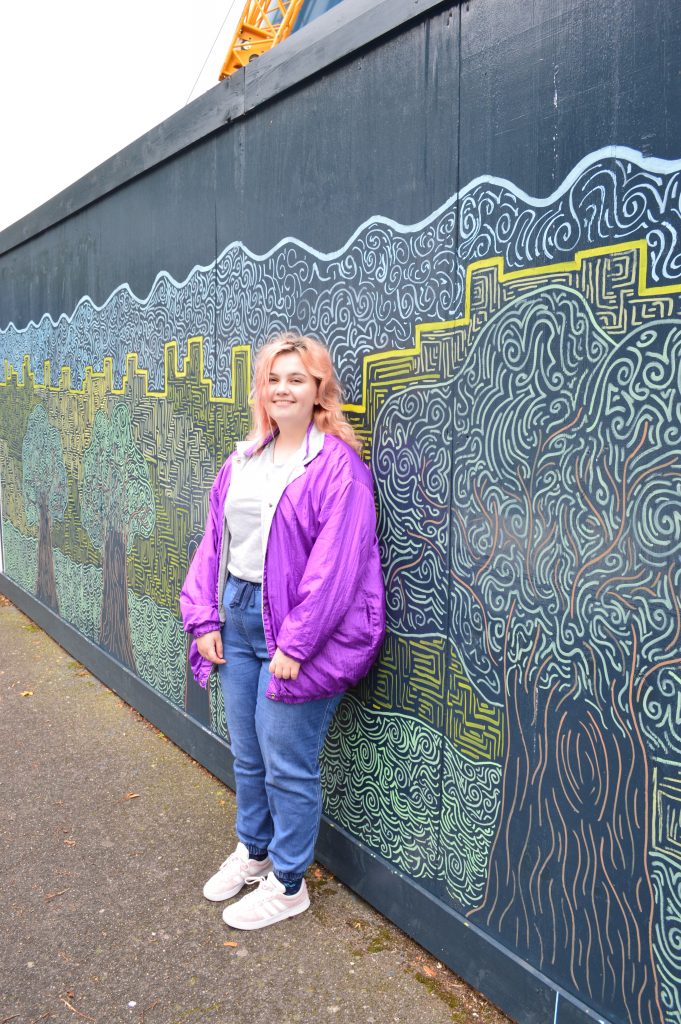 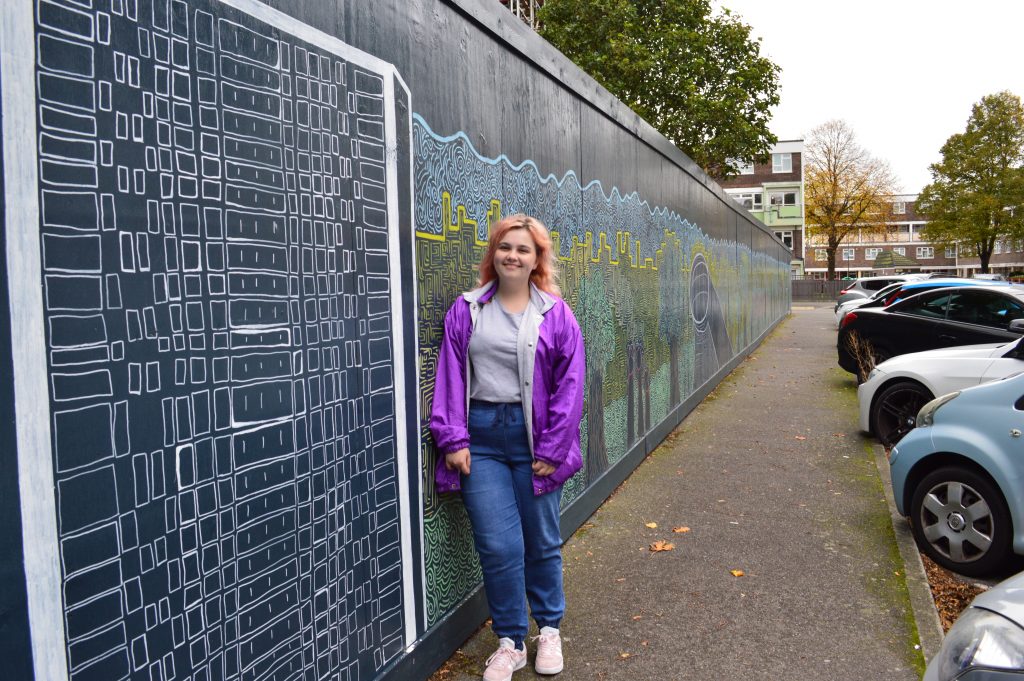 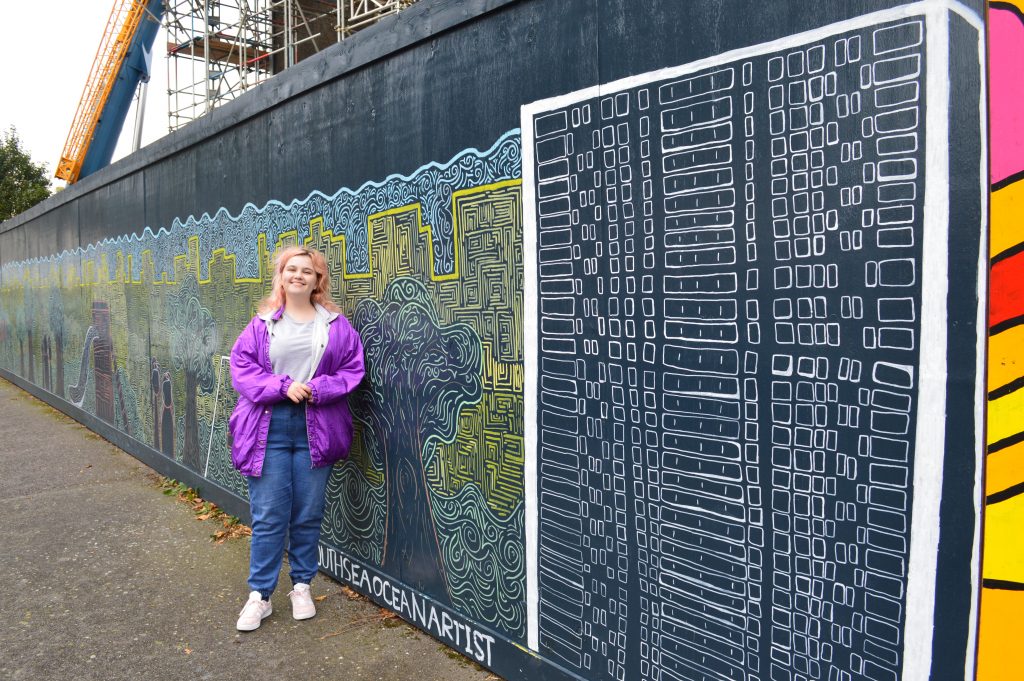 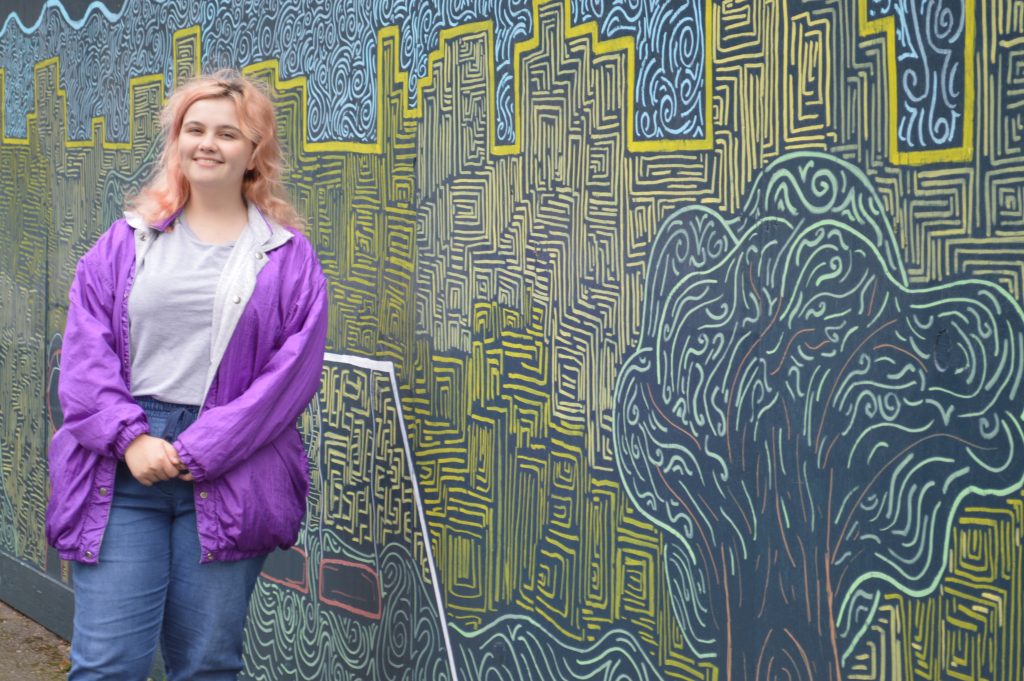 Skyla’s masterpiece will now be followed with artwork by local street artists, school children, charities, youth clubs, professionals and amateurs who will help decorate the site boundary surrounding two tower blocks that Portsmouth City Council is bringing down just metres from where Skyla grew up.

Skyla’s proud grandparents sat in their front garden to watch their granddaughter painting her fresco to cover 72 m sq of Horatia House deconstruction hoardings on the Park Street stretch of the site.

“We are so proud,” Skyla’s grandma Florence Harvey said. “We went over many times to watch Skyla working on the mural. It looks amazing and it’s nice to see something bright to look at in the area.”

Skyla – street art name #SouthseaOceanArtist – said: “The homes and green space the council will build to replace Horatia and Leamington Houses, after the blocks come down, will be really important for this area.

“I’m really proud that I’ve been able to use my artwork to bring a nice vibe to the area and I’d love to see other local people getting involved in Somerstown Street Gallery.”

Cllr Darren Sanders, cabinet member for Housing and Preventing Homelessness, was full of praise for the painting by University of Portsmouth computer animation student Skyla.

“The scale and quality of Skyla’s mural is fantastic,” Cllr Sanders said. “Her painting represents everything we want from this project because it’s a great example of how local creativity can have a positive impact on people’s lives.”

The council is appealing for more local artists, schools, charities and community organisations to come forward to work with them to decorate the hoardings with their local artwork.

Email molly.penney@portsmouthcc.gov.uk if you would like to get involved.

The project to carefully and safely bring down Horatia House, in Meriden Road, and Leamington House, in Earlsdon Street, is progressing well and is due to be completed late next year.

The council is working with a community panel to put together plans to improve the site, and the wider area, for the people who live there, after the blocks have come down.

The council and the community panel have said that they will create a high quality, sustainable, mixed-use urban neighbourhood. The community panel – which is at the centre of both the deconstruction and redevelopment projects – includes local people, resident groups, businesses, people who used to live in the blocks, schools and charities from Somerstown and the surrounding area. The group has been meeting every month since March 2021.

If you would like to join the community panel; call Tim Raw on 07901 100537 or email tim.raw@portsmouthcc.gov.uk

The council also hosted lighting workshops, public open drop-in sessions and play and plant events in the area surrounding the blocks this summer to find out how people want the area improved.

A Forest of Somerstown free community art session – as well as another public open drop-in exhibition, to give local people a chance to look at the plans for the area and to share their views – will be held on the corner of Earlsdon Street and Melbourne Place from 11am to 3pm on Saturday 27 November. The event will include free cakes, free hot drinks, a DJ and free wreath-making craft for adults and children. Everybody is welcome.

Go to www.horatialeamington.portsmouth.gov.uk to find out more about the project. On the website you can watch project videos and find every document relating to the deconstruction of the blocks and the redevelopment of the area.

We use cookies on our website to give you the most relevant experience by remembering your preferences and repeat visits. By clicking “Accept All”, you consent to the use of ALL the cookies. However, you may visit "Cookie Settings" to provide a controlled consent.
Cookie SettingsAccept All
Manage consent

This website uses cookies to improve your experience while you navigate through the website. Out of these, the cookies that are categorized as necessary are stored on your browser as they are essential for the working of basic functionalities of the website. We also use third-party cookies that help us analyze and understand how you use this website. These cookies will be stored in your browser only with your consent. You also have the option to opt-out of these cookies. But opting out of some of these cookies may affect your browsing experience.
Necessary Always Enabled
Necessary cookies are absolutely essential for the website to function properly. These cookies ensure basic functionalities and security features of the website, anonymously.
Analytics
Analytical cookies are used to understand how visitors interact with the website. These cookies help provide information on metrics the number of visitors, bounce rate, traffic source, etc.
SAVE & ACCEPT
Powered by